It is at once a small anniversary and an important signal – for the fifth consecutive time, JACK WOLFSKIN has been awarded the coveted Leader status by the Fair Wear Foundation (FWF)! This distinction honours the outstanding efforts of the company to ensure social, safe and fair working conditions at its worldwide suppliers.

The Fair Wear Foundation explicitly acknowledges the great commitment and the extraordinary progress of the outdoor specialist in effectively implementing and adhering to the agreed standards. JACK WOLFSKIN monitors 99% of its overall delivery volume, far above the 80% level required by the FWF. In the FWF’s current Brand Performance Check 2019, JACK WOLFSKIN earned 76% of the available points, giving it renewed Leader status and the highest possible rating.

The Idstein-based company’s established monitoring system – with regular audits and close supplier relationships – has proven successful, and intensive joint work has led to significant improvement in critical labour conditions. JACK WOLFSKIN places great emphasis on making sure that all of its production workers receive fair wages from their employers. To avoid subjecting employees to undue stress and excessive overtime hours, their workload is monitored regularly and public and religious holidays are taken into account. JACK WOLFSKIN has focused especially on its core markets of Vietnam and Bangladesh: here, almost all suppliers now pay their workers a living wage.

‘We are aware of our great responsibility as a company and are therefore thrilled to have again won the distinction of Leader status,’ says Melanie Kuntnawitz, who as Head of Vendor Control is responsible for all corporate responsibility issues at JACK WOLFSKIN.

Since 2007, JACK WOLFSKIN has committed itself to a code of conduct in making the working conditions at all production sites as fair and humane as possible. This includes the payment of living wages and adherence to an appropriate working time of eight hours per day. But standards such as free unionisation, workplace safety and the prohibition of child and forced labour must also be fulfilled. JACK WOLFSKIN has been an official member of the FWF since 2010. In summer 2014, as the first company in the outdoor sector, JACK WOLFSKIN published detailed information such as the name, address, number of employees and audit results of each individual manufacturing plant. This supplier information and the implementation status of the code of conduct are provided transparently for viewing on the company website.

Safety in the workplace and in workers’ living quarters is of equal concern to JACK WOLFSKIN as special protection of women. The production of functional clothing is labour-intensive, requiring many hand movements, and the taping of seams, for example, requires specialised skills. In the end, however, a good product can only be made by a satisfied employee. Dealing respectfully with the individual employee is an important part of this. For this reason, JACK WOLFSKIN also takes religious practices into consideration, coordinating production cycles accordingly. 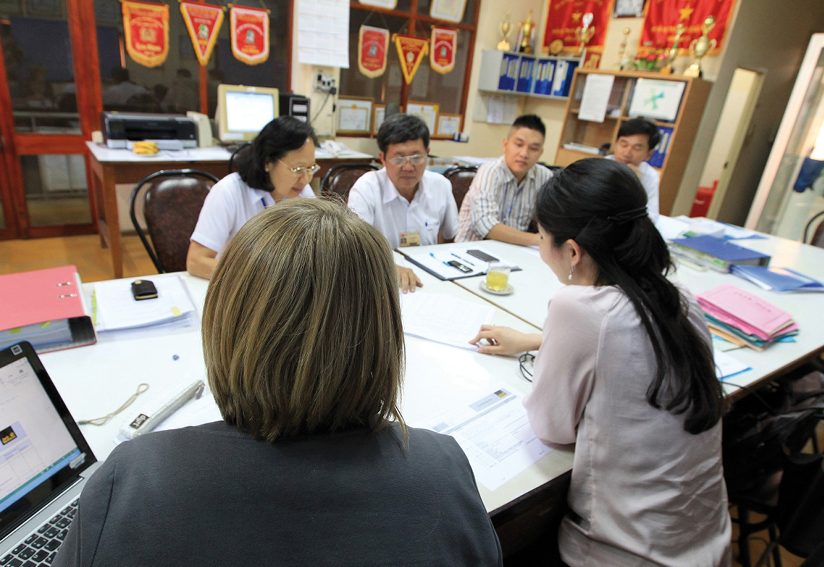 The FWF is an independent, non-profit multi-stakeholder organisation that works with its member companies and their producers to improve working conditions in the textile industry worldwide.

In its independent agency, it assumes a monitoring function vis-à-vis the production plants as well as the member companies. In annual Brand Performance Checks, the FWF examines to what extent the respective member company advocates for the implementation of good and safe working conditions in manufacturing facilities. These controls led to JACK WOLFSKIN once again being awarded Leader status, a testament to its very strong commitment.

The Brand Performance Check 2018 is available for download at the websites of the Fair Wear Foundation and JACK WOLFSKIN.

Guidelines on the use of press materials:The contents provided can be used free of charge as part of editorial coverage on JACK WOLFSKIN. Misleading commercial use is regarded as unlawful. Each photo publication must be followed by the note “Photo: JACK WOLFSKIN” and, unless detailed in the picture caption, must be accredited to the photographer.Please send specimen copies to the address mentioned below.

{{'In order for us to monitor and continually improve our website and service, we use cookies to collect anonymous information via Adobe Analytics on how you interact with our website. Based on this data, we are able to continually optimise our website for different devices (e.g. laptops, tablets, smartphones, etc.) and browsers (Safari, Chrome, Firefox, Microsoft Edge, etc.), meaning that you are always able to get the best possible and problem-free experience from our website.' | truncate:(jwsdwPicker.cookieSettingsPicker.dntStatisticsShowMore ? Infinity : 140)}}

Show less Show more
What is My Store?

Jack Wolfskin uses cookies to enable the basic functionality of the website. Moreover, the use of cookies helps us to provide you with the best possible service regarding personalisation, statistics and marketing (also from external providers). The cookies help us to collect information on the utilisation of our website by the website’s visitors, so that we are able to continually optimise it and send you offers geared towards your interests.

By clicking on the button "Accept all", you agree to the cookies used by us categorised by ‘necessary’, for ‘personalisation’, 'statistics' and 'marketing'.