Following Microsoft’s announcement to reduce support for Internet Explorer 11 even further, along with their recommendation to switch to Microsoft Edge, we, too, have now decided not to support this browser any longer. This was a conscious decision, on the one hand in order to protect you and your data, and on the other to ensure that we can implement new technologies that Internet Explorer 11 does not support.

Stranded in our own home That's kind of how we're all feeling right now. Four walls become a tiny island where we have landed through no fault of our own. Professional mountaineers know such situations when they are snowed in at base camp. So do astronauts and sailors who spend months in cramped conditions and travel through endless expanses.

But for us "normals", this situation is anything but commonplace, made all the more difficult when under quarantine with energetic children, stuck in the house with an urge to move around a lot.

None of us know when our normal post-Corona lives will begin again, let alone whether we will be able to move freely again in Germany, in Europe or around the world this coming summer or autumn. We don't even know when the micro-adventure on our own doorstep can take place again. But who actually says that you have to leave your own property for adventure? 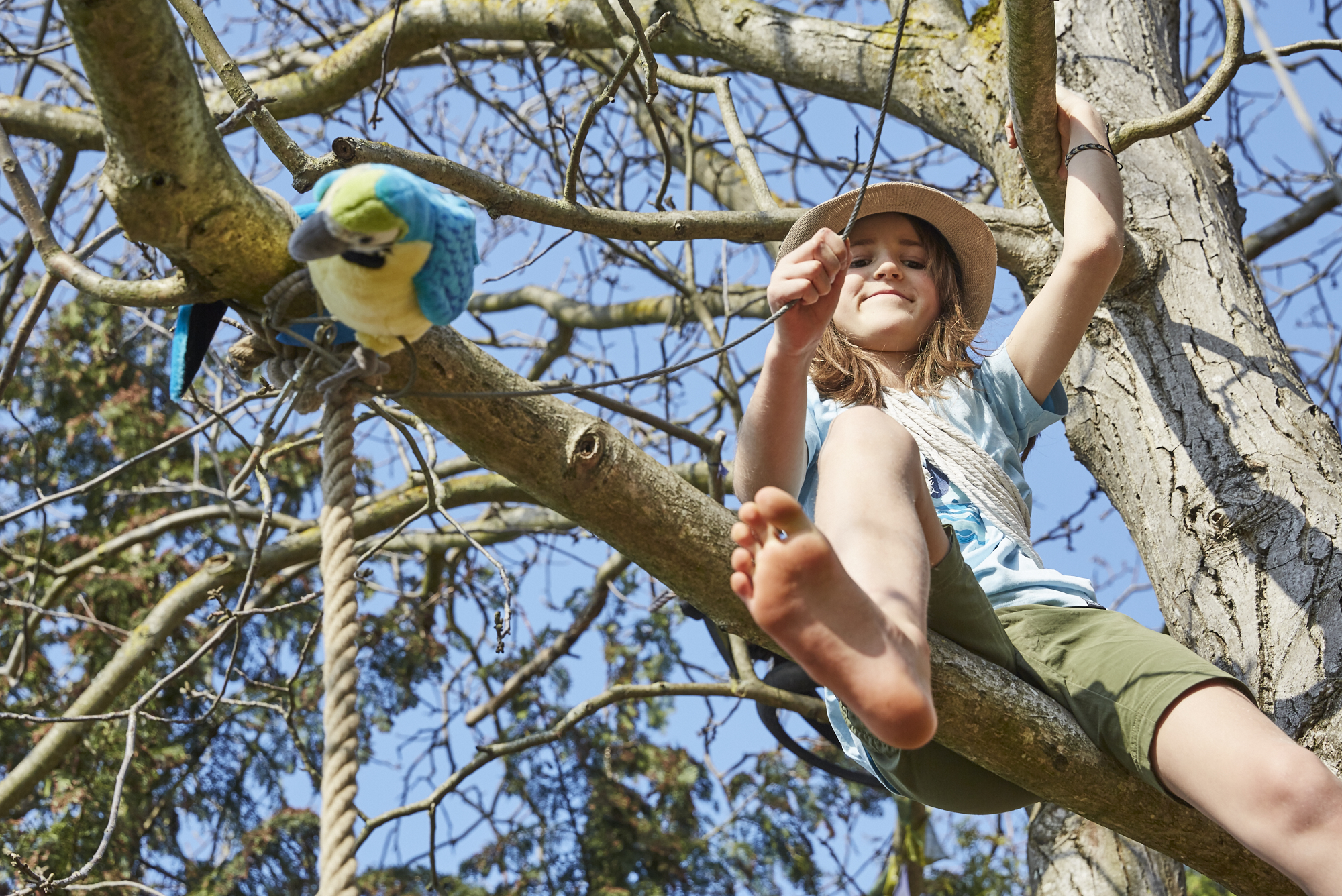 Off to the tropics

"We're shipwrecked!" Granted: my mood has hit rock bottom. "True. Like Robinson Crusoe!", Frieda thinks, giving us an idea: why not make a virtue out of necessity? Our garden is not exactly the tropical paradise in which Daniel Dafoe's novel hero is stranded. But at least Spring is just about to hit the land with full force. With a little imagination, the chirping of the tits and sparrows can be heard as a tropical concert of birds, the dog in the bushes can be seen in wolf's clothing, the Greek tortoises grow to ten times their size. Little did we know that the tree house, built years ago from building remains, is the perfect shelter for shipwrecked people in their own garden.

On the sunny side

In contrast to Robinson's tropical island, there are no fruits growing in our garden and apart from a patch of wild garlic, tender dandelion, garlic rocket and goutweed, we won't find much to eat here at this time of year. However, the children don't mind in the least if we ignore the facts and fill our backpacks with food. The sun is shining, but the nights are still bitterly cold, so we choose to adopt the "Robinson Deluxe" version of this tale - taking tents, sleeping mats, thick sleeping bags, water bottles and clothes for all weather conditions. In addition, on our "beach" at the garden pond, a few pots, two knives and even a camping stove have been washed up. In a barrel, which floats over the water towards us, there are even a few bottles of juice. How could we be so lucky? 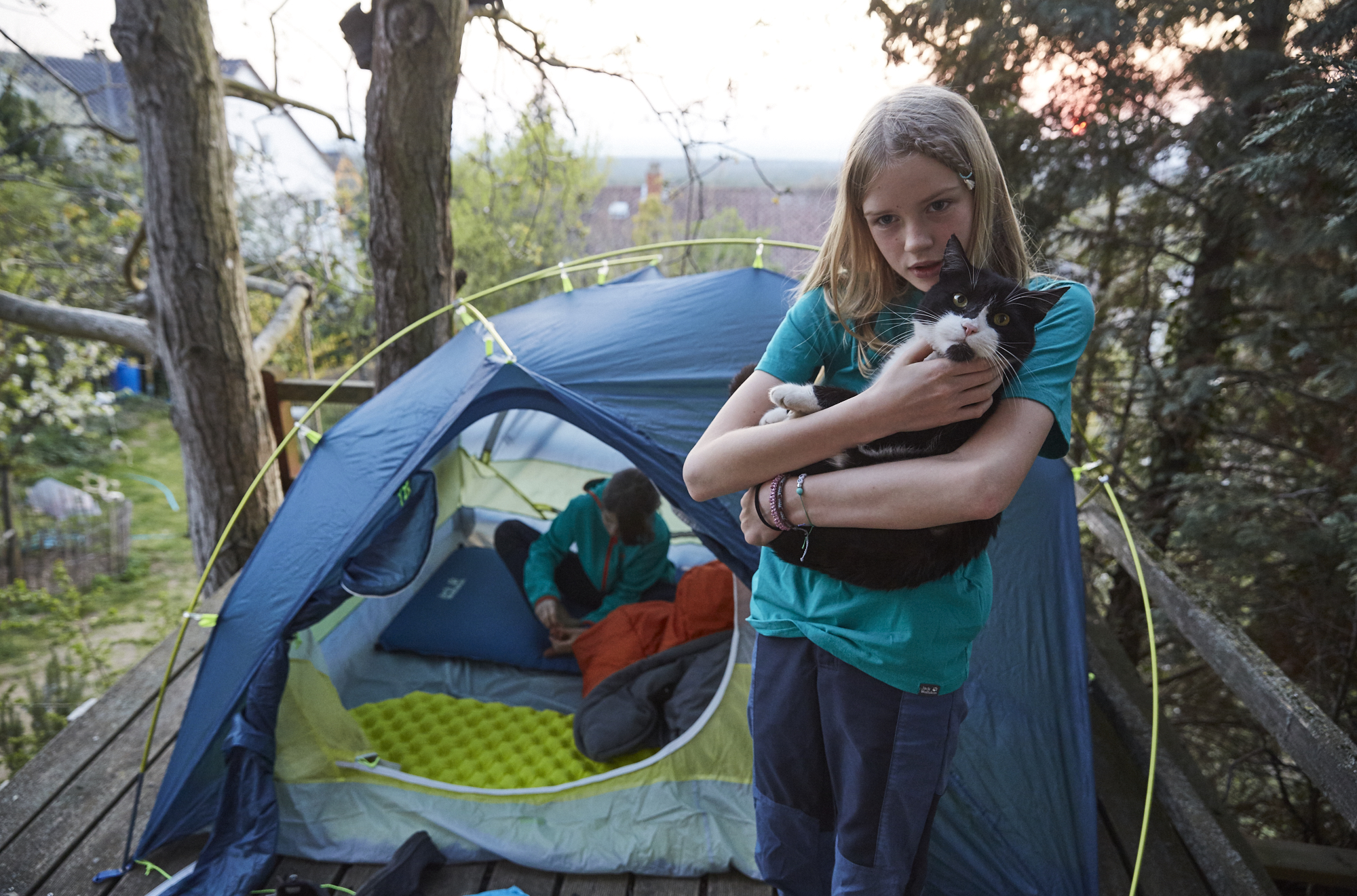 Frieda and Hannah discover a thick rope under the tree house and knot it to a stable branch of the walnut tree above which Robinson's new home is enthroned. This way they can easily abseil down from the viewing platform and, if one of the wild animals comes too close, can quickly be brought to safety too. "We need a fire, Robinson always had one… so that he would be rescued one day!" Hannah is chosen to be a wood collector. She straps a rucksack on her back and climbs a hanging ladder into the unsafe wilderness full of danger. "Watch out, a panther!" cries Frieda after her as our fat cat strolls leisurely through the garden. "They don't live on a tiny tropical island!" Mio says. "They do now," Frieda decides.

"Robinson, what will the weather be like in the next few hours?" Frieda looks into the distance before exclaiming "good!" - she sounds satisfied. "Not a tropical storm in sight?" Hannah says, as she looks up. "Nope, just a little drizzle, maybe. To be on the safe side we set up a tent on the platform in the treetop. Followed by a second one in the tree house, because the children are afraid that a few cunning ship rats have saved themselves from the land and might nibble on their toes tonight. Hannah rolls out her sleeping bag in the sun outside the tent and starts to carve. She sticks a small piece of coal into the hollow stick that she had found planted in the ground. Time for us to send a message in a bottle!

"What's the name of the island where Robinson landed?" asks Frieda. None of us knows. It doesn't matter anyway. After all, we want to send mail from our island. "And what do we call it?" Frieda asks. After all, the island wasn't inhabited before we arrived. "I wonder... Coro Island?" says Mio dryly, making us laugh so hard that Hannah drops the snipping knife. It disappears between the wooden planks. Coro Island - I think that sounds like an adventure. Let's make the best of it.

Over the campfire hangs the soup pot, from which steams ascends out accompanied by a delicious smell. By a miracle we were able to save a guitar and bring it ashore when the ship was wrecked, now Jen sits with in on the observation deck. Mio, Hannah and Frieda slip into their fleece jackets and sneak around the pond in the twilight, staring out of it we start to see the twinkling of eyes. Toads? No way! There are alligators on Coro Island! Thank goodness they can't climb the tree house and quite incapable of unzipping a tent. At 9 pm, it's already pitch-black. Robinson would have gone to sleep by now. But our children don't care. This is Coro-Island time. 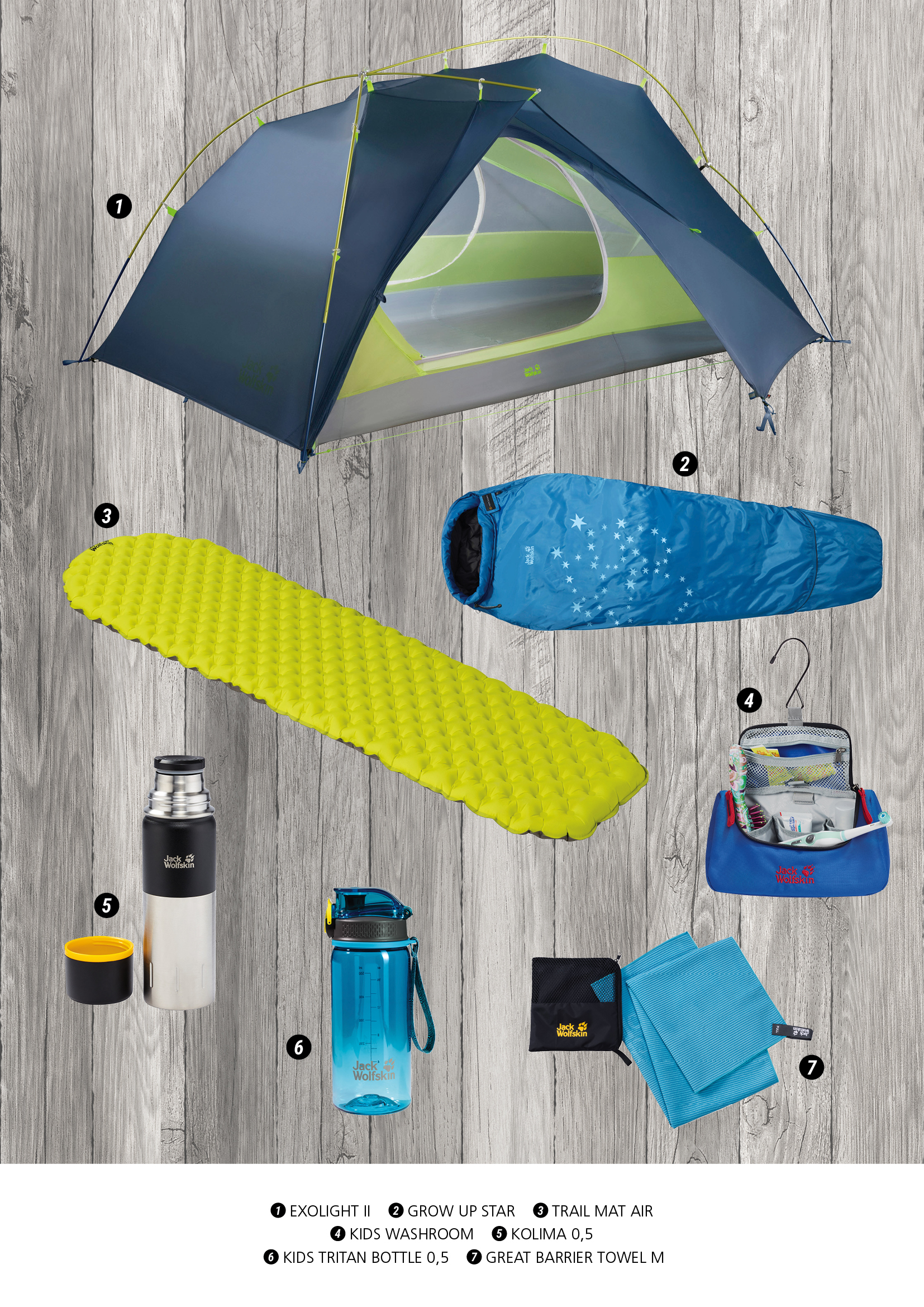 Guidelines on the use of press materials:The contents provided can be used free of charge as part of editorial coverage on JACK WOLFSKIN. Misleading commercial use is regarded as unlawful. Each photo publication must be followed by the note “Photo: JACK WOLFSKIN” and, unless detailed in the picture caption, must be accredited to the photographer.Please send specimen copies to the address mentioned below.

{{'In order for us to monitor and continually improve our website and service, we use cookies to collect anonymous information via Adobe Analytics on how you interact with our website. Based on this data, we are able to continually optimise our website for different devices (e.g. laptops, tablets, smartphones, etc.) and browsers (Safari, Chrome, Firefox, Microsoft Edge, etc.), meaning that you are always able to get the best possible and problem-free experience from our website.' | truncate:(jwsdwPicker.cookieSettingsPicker.dntStatisticsShowMore ? Infinity : 140)}}

Show less Show more
We have sent you an email with information on how to reset your password. It may take a few minutes for the email to arrive in your inbox. Please also check your junk folder to ensure that you have received our email.
Forgot your password?

Jack Wolfskin uses cookies to enable the basic functionality of the website. Moreover, the use of cookies helps us to provide you with the best possible service regarding personalisation, statistics and marketing (also from external providers). The cookies help us to collect information on the utilisation of our website by the website’s visitors, so that we are able to continually optimise it and send you offers geared towards your interests.

By clicking on the button "Accept all", you agree to the cookies used by us categorised by ‘necessary’, for ‘personalisation’, 'statistics' and 'marketing'.